27/04/2021 04:45
Navagio Bay is located in Greece, on the picturesque northwestern coast of the island of Zakynthos, at a considerable distance from the capital of the island of the same name, Zakynthos. In English, the bay is called Navagio, and in Greek it is Ναυάγιο, which translated from Greek means Shipwreck.
In addition to the official name of the bay - Navagio, there is another name for it, folk, more remarkable, with an emphasis on the pirate theme, the Greeks call this bay - the Smugglers Cove. Where did this unusual name come from? And the fact is that in the 80s of the 20th century, the Panagiotis ship carrying contraband cargo (cigarettes and other goods), escaping the pursuit of the Greek coastal police, took refuge in this bay, but ran aground and capsized. The smugglers left the ship in boats. And after some time, the sunken ship was thrown by a storm on the coast of the bay. So, the bay, which had the name "St. George" for a long time, changed its name to "Navagio", i.e. to the Shipwreck.
Since then, this ship has been lying on the beach, half-buried in sand, and all rusted. The reclining ship on the beach of the bay has become the hallmark of the island of Zakynthos. Almost every tourist on Zakynthos visits this amazingly beautiful and unusual place. And the rusted ship against the background of the beach has become the main attribute: on gift cards, fridge magnets, and all kinds of souvenirs.

How to get there 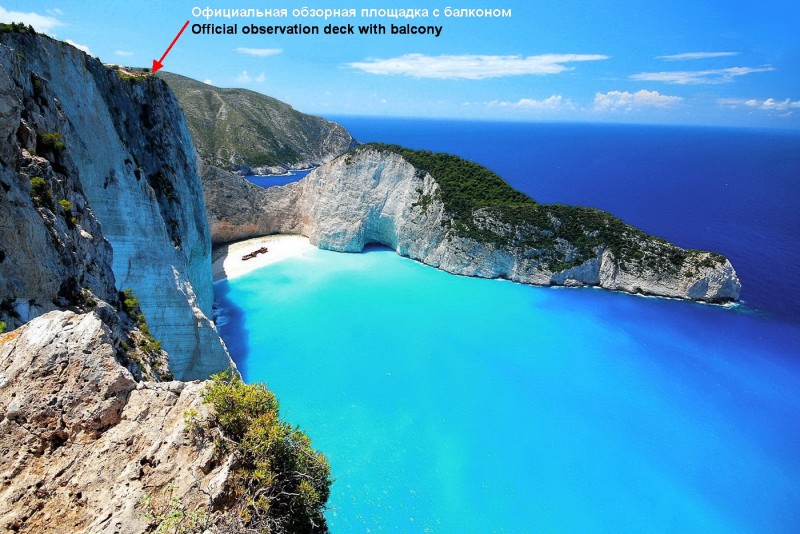 You can get to the Navagio observation deck by yourself in a rented car, or in a group on a sightseeing bus. Some dashing tourists get there even on rented ATVs, which is very dangerous, difficult and inconvenient, because the path is not close.

Having reached the place, we parked the car. The parking space is quite large and spacious. There were only a few cars and one big tourist bus in the parking lot. It immediately became clear to us that if there is a sightseeing bus, then there will be a queue. Having reached the observation deck, our assumptions were confirmed, a long queue of tourists lined up to the protruding balcony overlooking the bay.
We are not supporters of standing in lines, and therefore temporarily decided to take a walk nearby, but at some distance from other tourists, in the hope that over time the bus will leave and the line to the Navagio observation deck will dissipate. 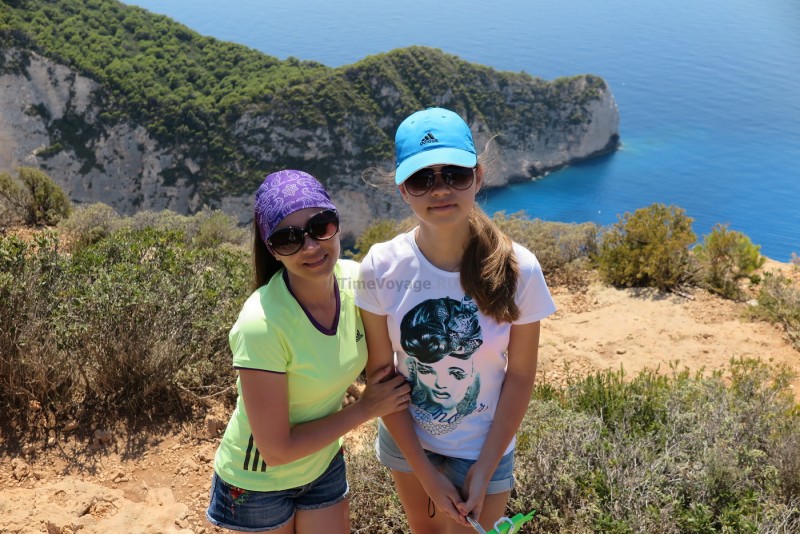 Everywhere, from any point of view, stunning views of the bay, mountains and the coastal zone of the Ionian Sea open up. The divine beauty of nature surrounds from all sides. Around the silence, calmness, and the heady singing of the Cicadas. There is even a desire to sit on a stone and not go anywhere else, sit and meditate, silently look at the Ionian Sea, and watch yachts and boats from the top of the mountain, which from above seem so small, like toys. 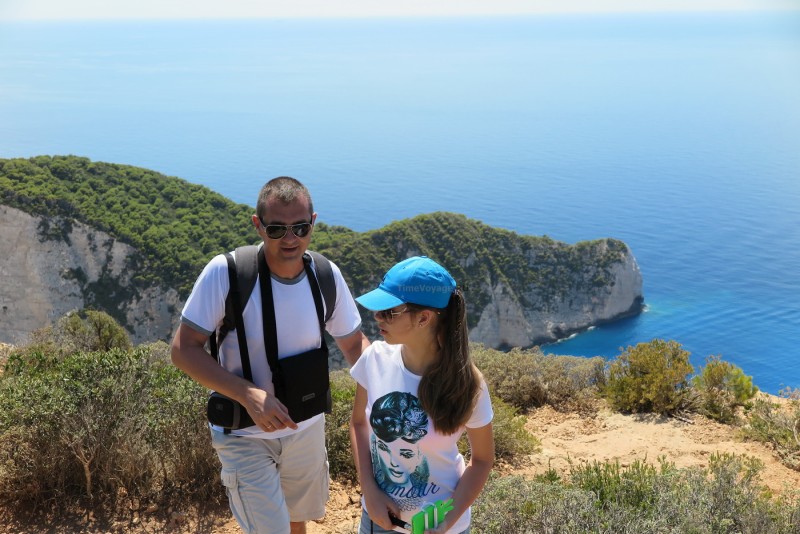 Attention! Walking along the mountain, away from the official fenced area of the observation deck, be careful and attentive, do not get too close to the cliff, and if you are with children, then constantly monitor them and always be together.

The most beautiful views of Navagio Bay are not from the official observation deck, but from the wild, unfenced area. To be honest, the passage up the mountain into this zone is prohibited, as evidenced by the "No entry" sign located on the border of the official safe observation zone. But no one monitors compliance with this, and almost every tourist goes beyond the border of the safe zone, moving further and further away from it, along curved mountain paths, along low, but very thorny bushes, in search of the most gorgeous place for a photo. 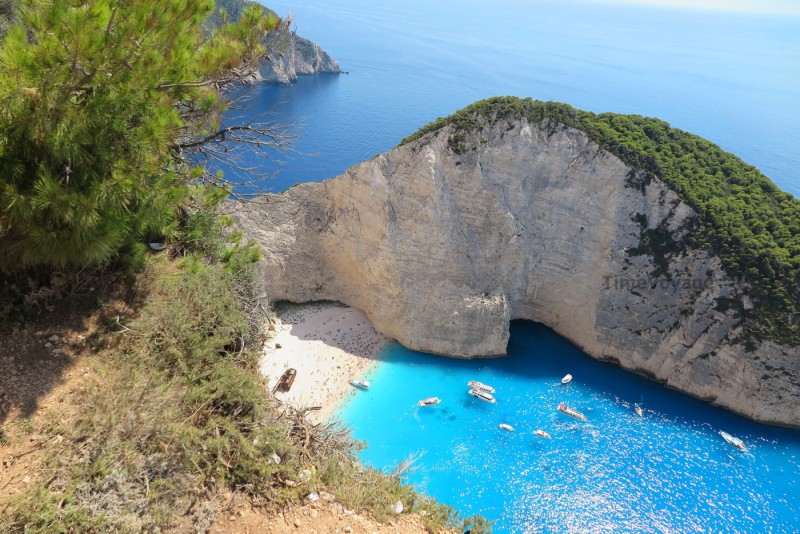 Having found such a place, you can take very beautiful photographs of the landscape of the bay and the Navagio beach. To do this, you need to go to the edge of the cliff, but, AT THE SAFE DISTANCE, stretch your hands with the camera towards the cliff, and take a photo. 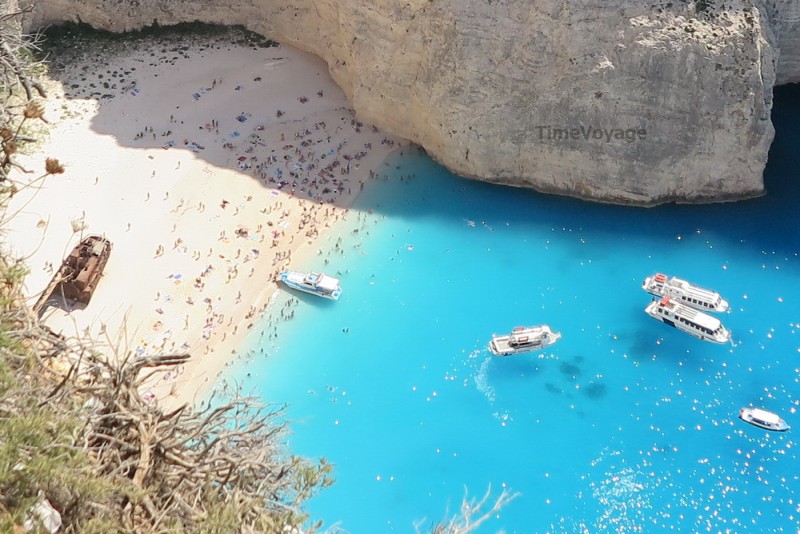 In the process of photographing, you need to be extremely careful so as not to fall off the cliff in pursuit of a beautiful frame. Do not risk your life and loved ones in vain for the sake of some beautiful photo frame. 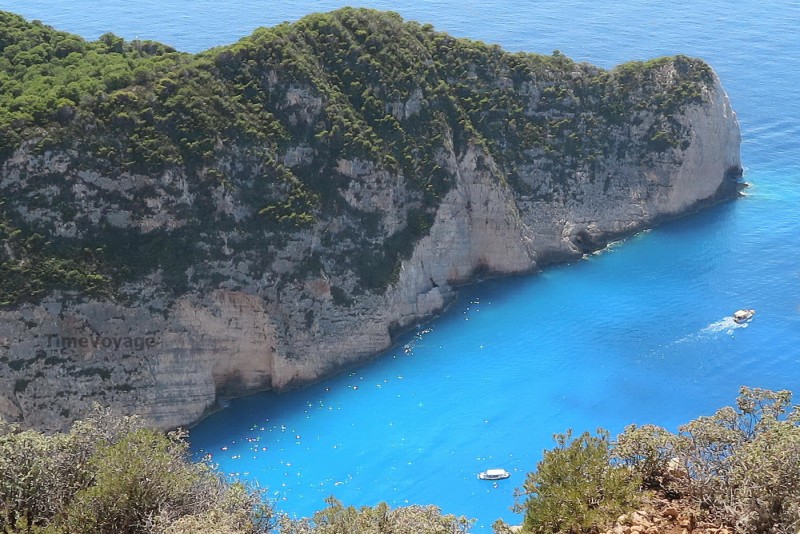 It is difficult and very dangerous to take a selfie in this place or photograph a person with a full view of the bay. for this, one would have to be photographed at the very edge of the cliff, and at the same time stand on a gentle slope of gravel and sand. It is very dangerous. 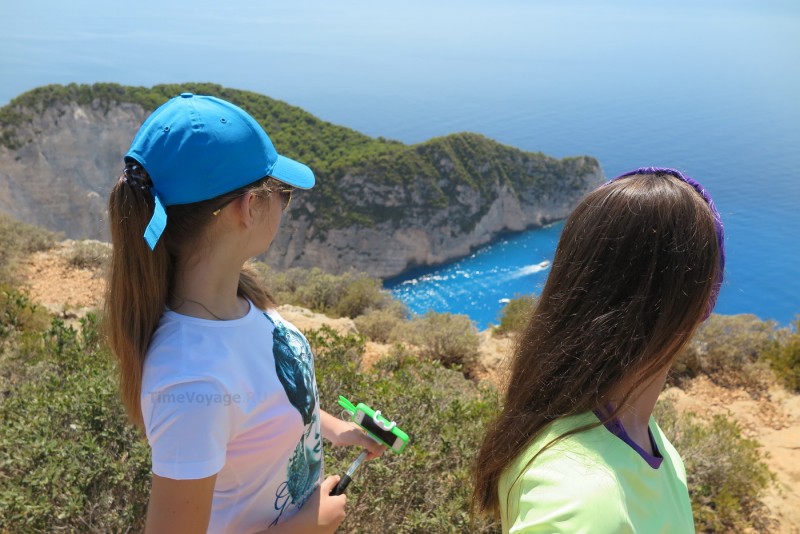 Therefore, we made family photos for memory simpler, but safe for life, a few steps from the cliff. Part of the bay and the Navagio beach during such shooting does not get into the frame, but such a photo session is safe.

Observation deck with a balcony

It's time to head back to the official Navagio Observation Deck. The queue to the balcony has noticeably decreased, but has not disappeared. I had to stand for a while to get to the balcony. While we were standing in line, watching the tourists who had already got on the balcony, we realized that it would not be possible to take a picture on the balcony normally. Everyone enters the balcony not individually, but in a bunch, like a herd of sheep, crowded in a small space so that everyone interferes with each other. 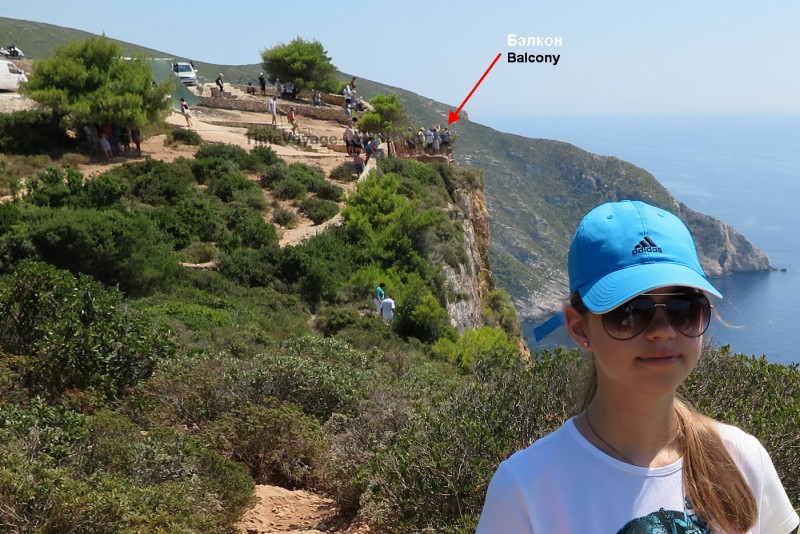 Once on the balcony, our assumptions were confirmed. We were immediately drawn from behind by tourists "rams". Humanly, it is impossible to take a picture, it is impossible to step back a step to choose the right angle. Even focusing is difficult because very crowded, some kind of crush, and someone is constantly nestling. People, like stupid cattle, do not understand anything, and they interfere with themselves and strangers, they stand as in a cattle paddock, shoulder to shoulder, but at the same time they are content like rams in a pasture. And most often, such situations occur at tourist points, where excursion buses arrive one by one along the route. Therefore, such sudden and chaotic queues are created. And the Navagio observation deck is one of such points of the excursion route around the Zakynthos island. 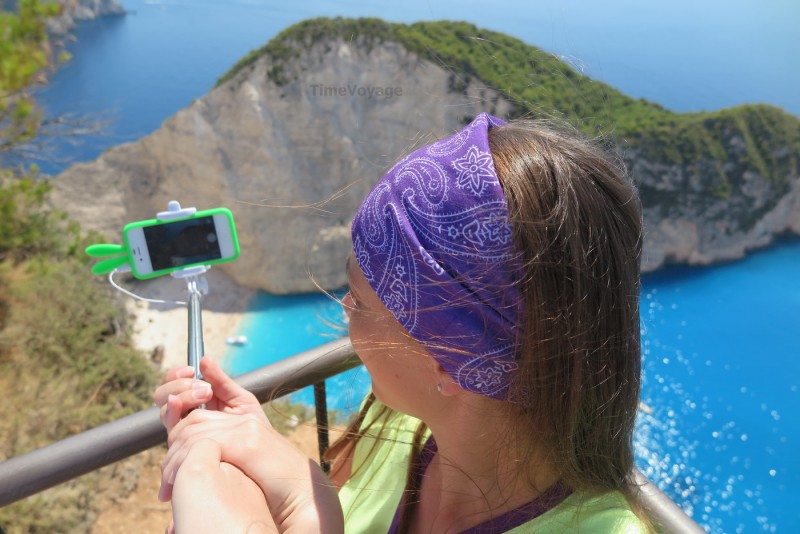 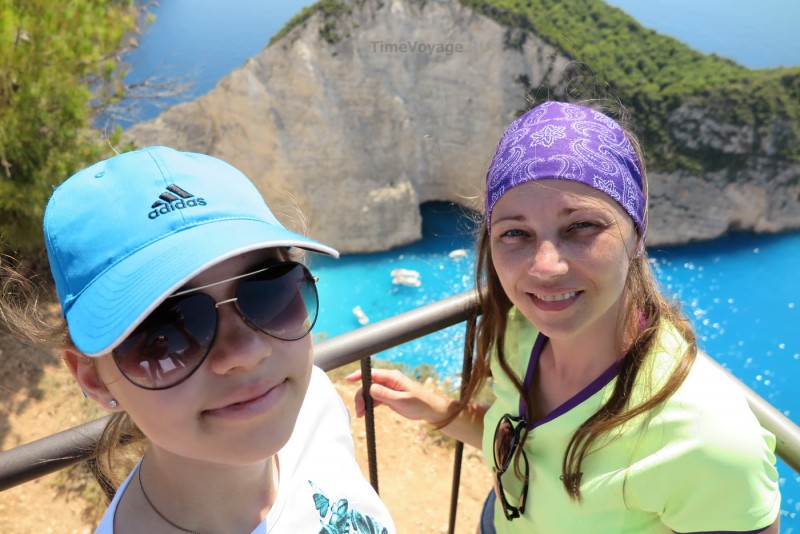 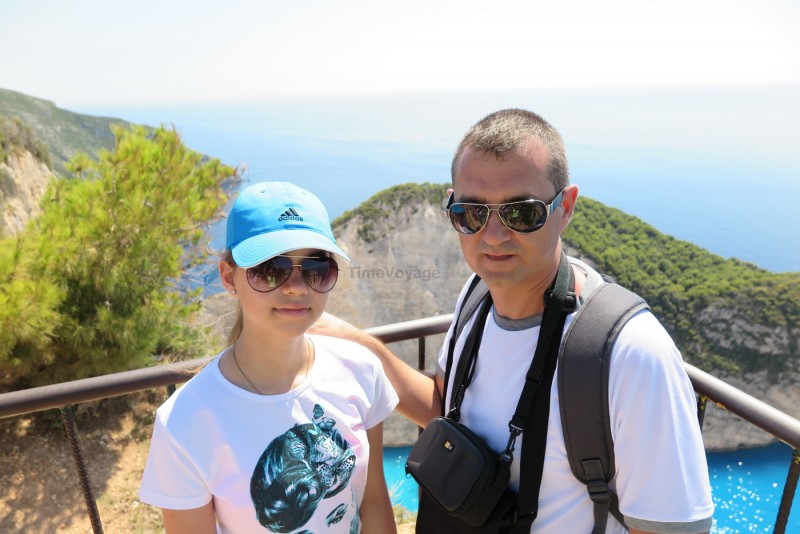 As a result, in 1 minute, we found a few seconds to still make a few photos somehow, and quickly leave the balcony. The crush is not our element.
No, of course, we understand everything, the view from the balcony is fantastic, but you need to remain civilized people, take turns, keep your distance so as not to create a crush, and not detain others, being on this balcony for 10 minutes, taking 100 selfies, in different poses and with different grimaces, giving a shit about everyone else in the queue. Such people annoy us!

View from the road (near the mini-cafe)

Between the parking lot and the observation deck there is a structure very similar to a cafe, but it is old and seemingly somewhat half-abandoned, and by the time of our visit it was not functioning. Maybe it only opens in the evenings? - We do not know.
But, a little closer to the road, there is a small booth stylized as a mini-cafe. True, from the entire assortment there were only soft drinks and ice cream, but in principle this is quite enough, because tourists do not stay long at the Navagio observation deck, looked around, photographed the bay, and left. 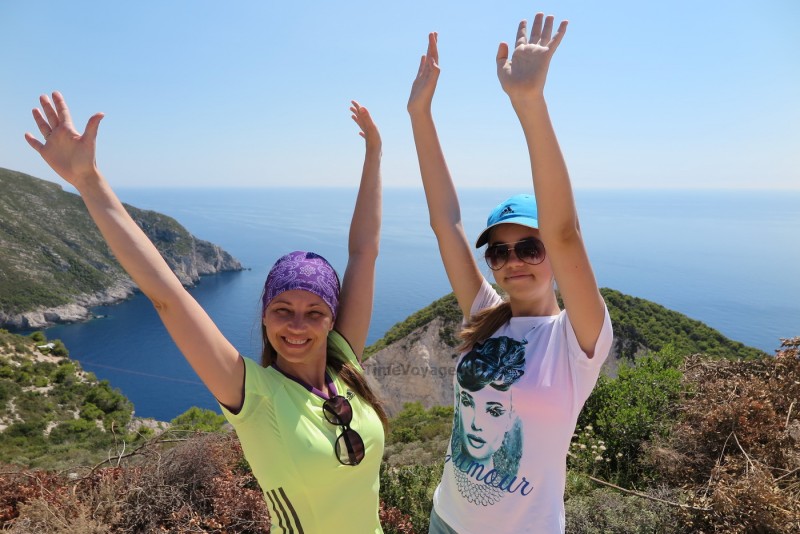 We've visited the Navagio observation deck, it's time to move on, because this is Greece, the island of Zakynthos, and here it is unusually beautiful everywhere, wherever you go, regardless of direction - everywhere there are mountains and the sea, and dizzying landscapes. 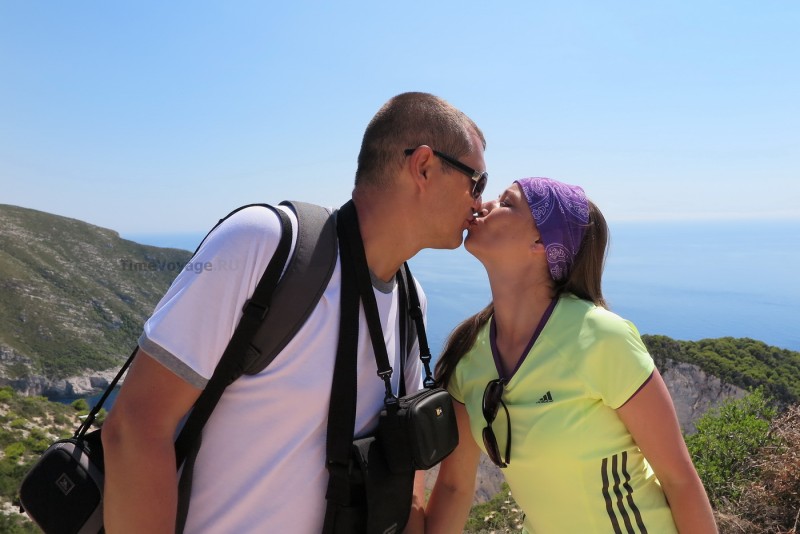 And, of course, you must definitely visit the Navagio beach itself, which can only be reached by water by boat, but we will tell you specifically about the beach in a separate article.

Advantages:
• excellent and fabulous views of the bay
• beautiful surrounding nature
• free parking
• there is a small cafe-booth (soft drinks and ice cream) if you want to cool off

Disadvantages:
• a long queue at the protruding balcony of the observation deck during rush hours, when tourist sightseeing buses with a large number of tourists arrive

Coordinates of the Navagio observation deck overlooking the Smugglers Cove, on the interactive map • Get directions

Navagio is a visiting card of the island of Zakynthos, the main attraction of which is the snow-white Navagio beach, in the middle of which lies a large, rusty ship, which in turn has long become an integral part of the beach and the most attractive tourist attraction. And, the Navagio observation deck - allows you to look at all this splendor from a bird's eye view. 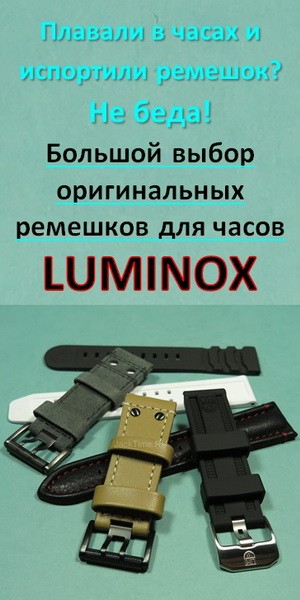